Our friend Brenda T. proposed a hike to Drippings Springs in the Organ Mountains, and then Kim R-S suggested we tack on a camping trip. Let's go!

Aguirre Springs Campground was a very nice surprise. Perched high on the north side of the mountains, the campground has well-spaced sites and views to die for, plus a snakey one-lane access road keeps the very large rigs at bay. You'll want to get up early to catch the rising sun lighting up the "needles" at the top of the range. 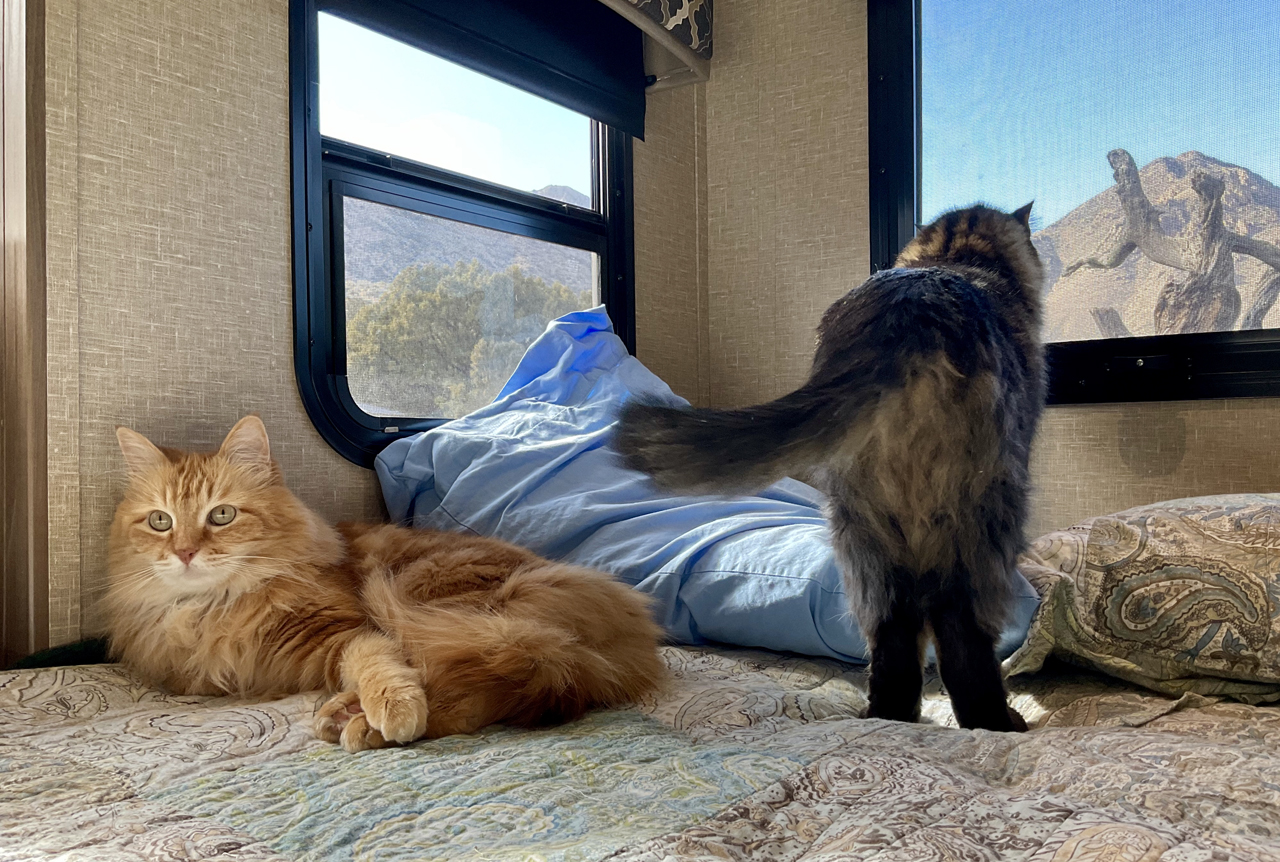 Elio and Madeleine settling in for the evening. They're getting really good at this! 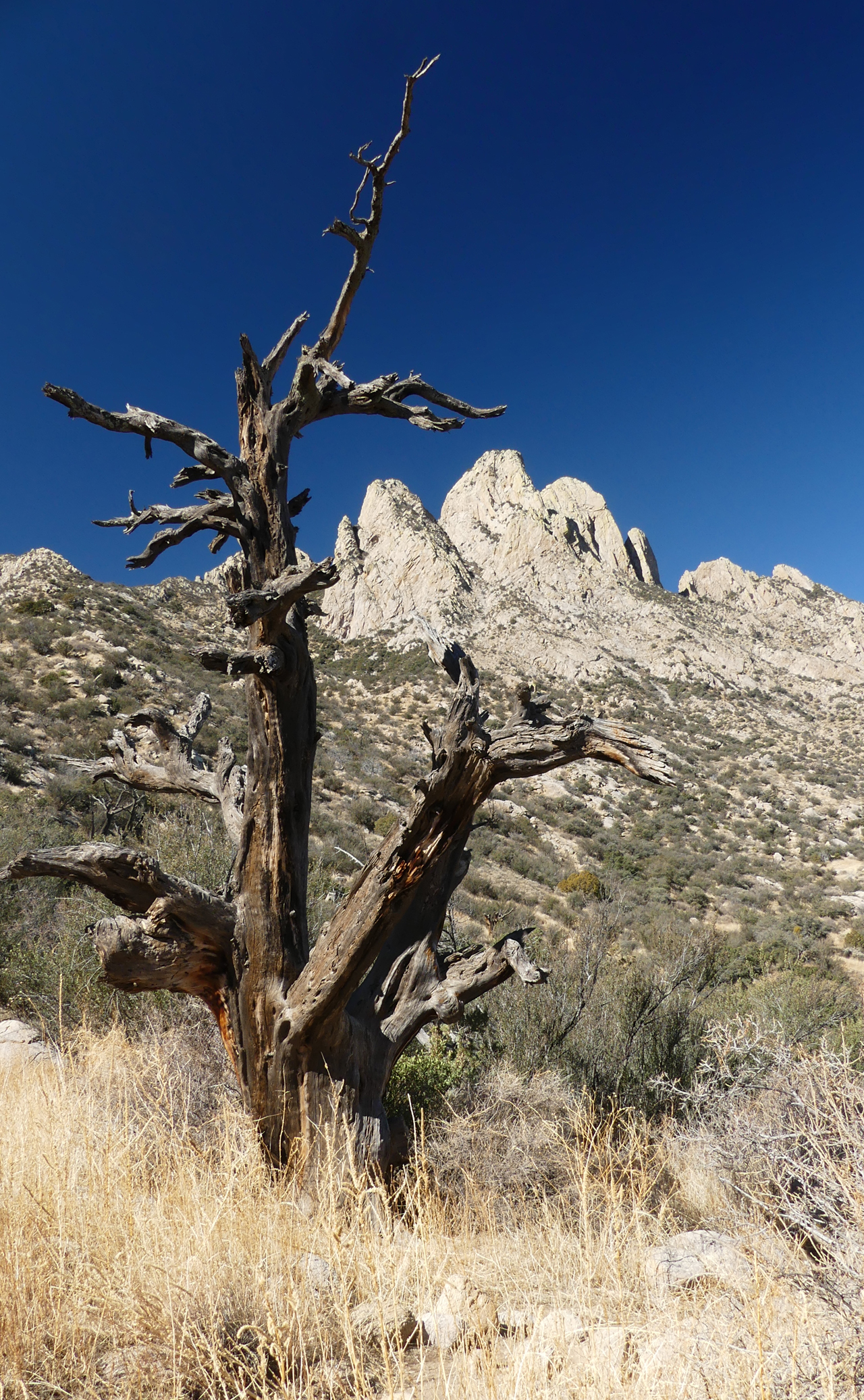 A day ahead of the rest of the group, we had time for an additional hike, and Kim proposed the Pine Tree Loop which takes off right from the campground. 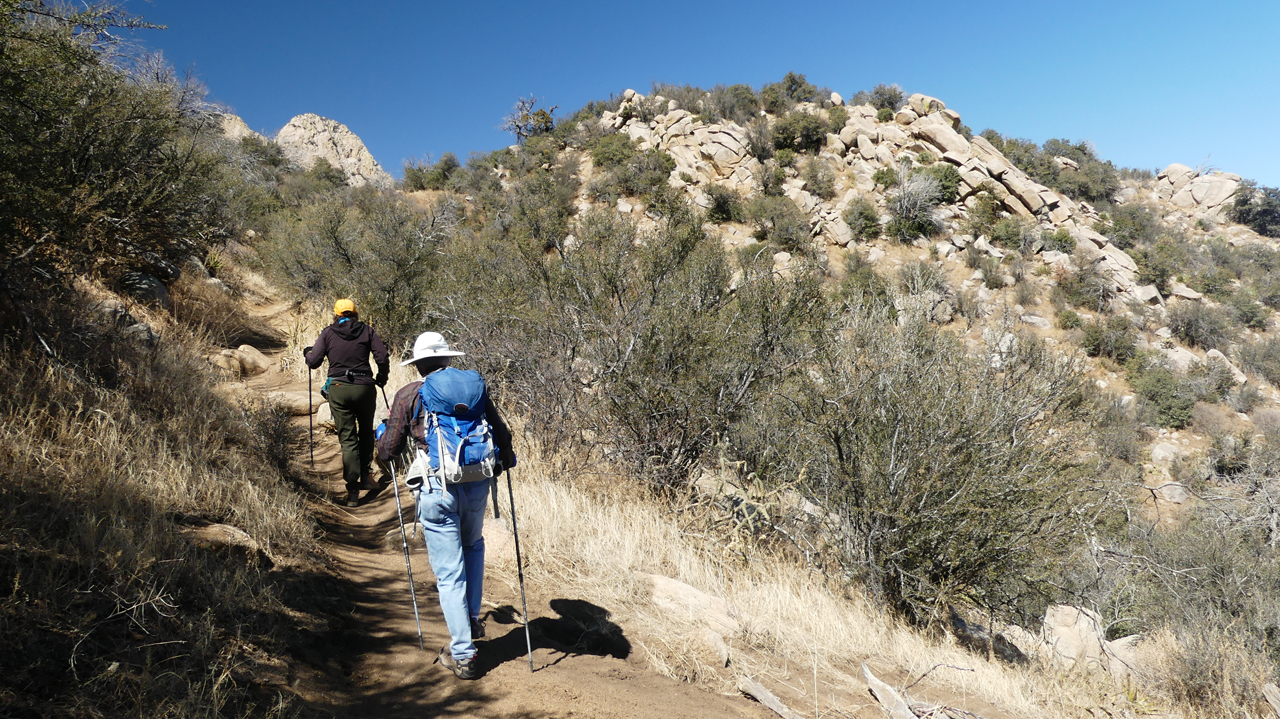 The loop tracked at 4.35 miles with a cumulative 1600' gain/loss, but with a lot of up and down on a trail that winds around a steep slope covered with large granite boulders. 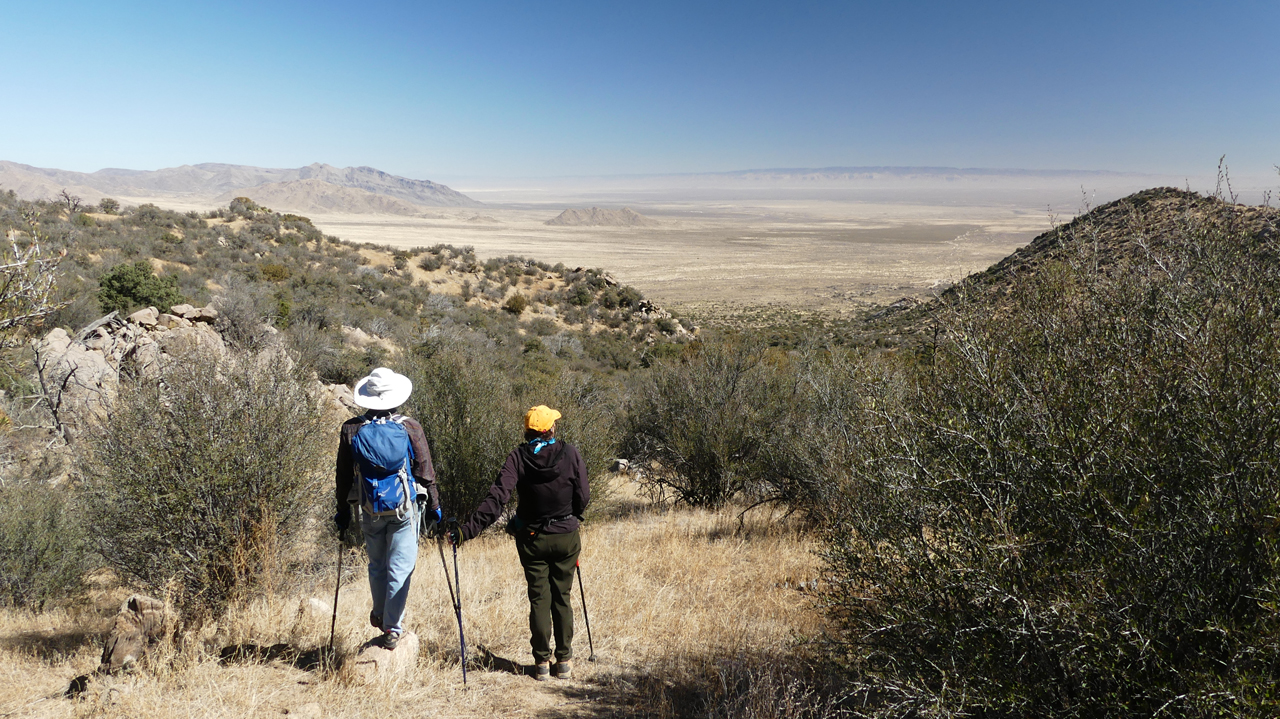 But the views were stupendous, of the "needles" at the top of the Organ Range, and across the valley to the distant glow of White Sands National Monument. 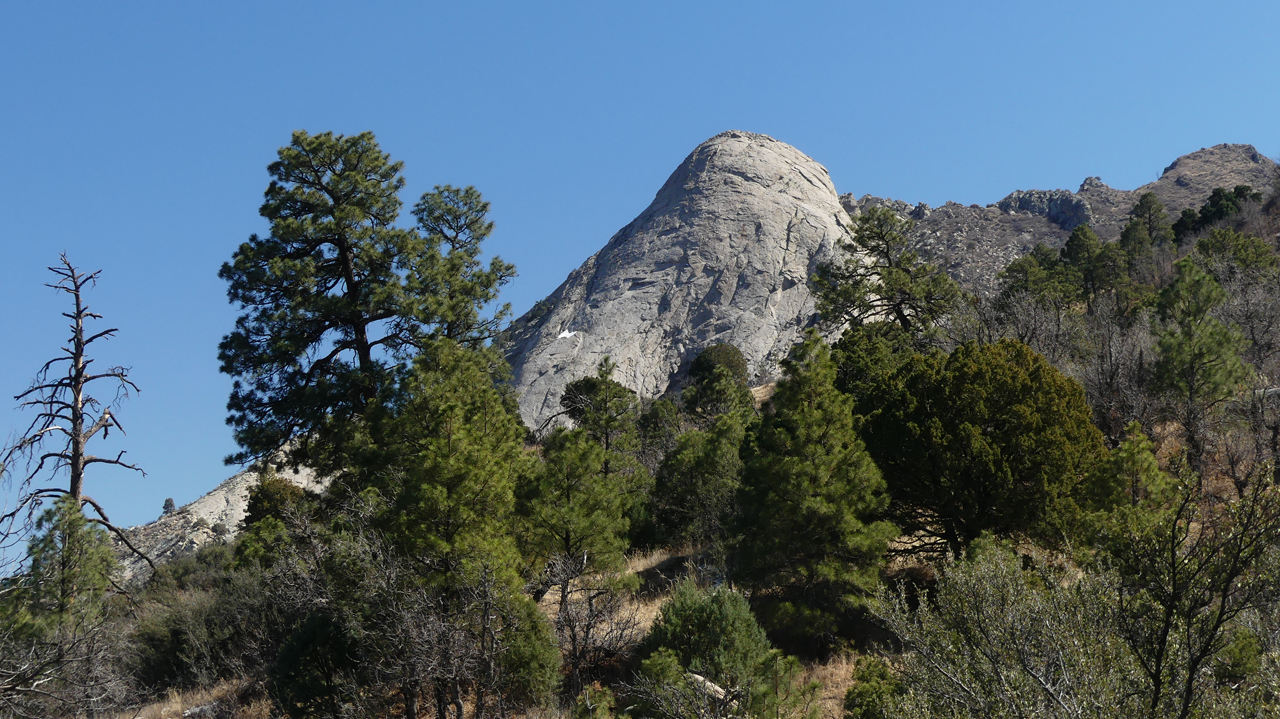 An imposing rock dome with a prominent patch of ice. 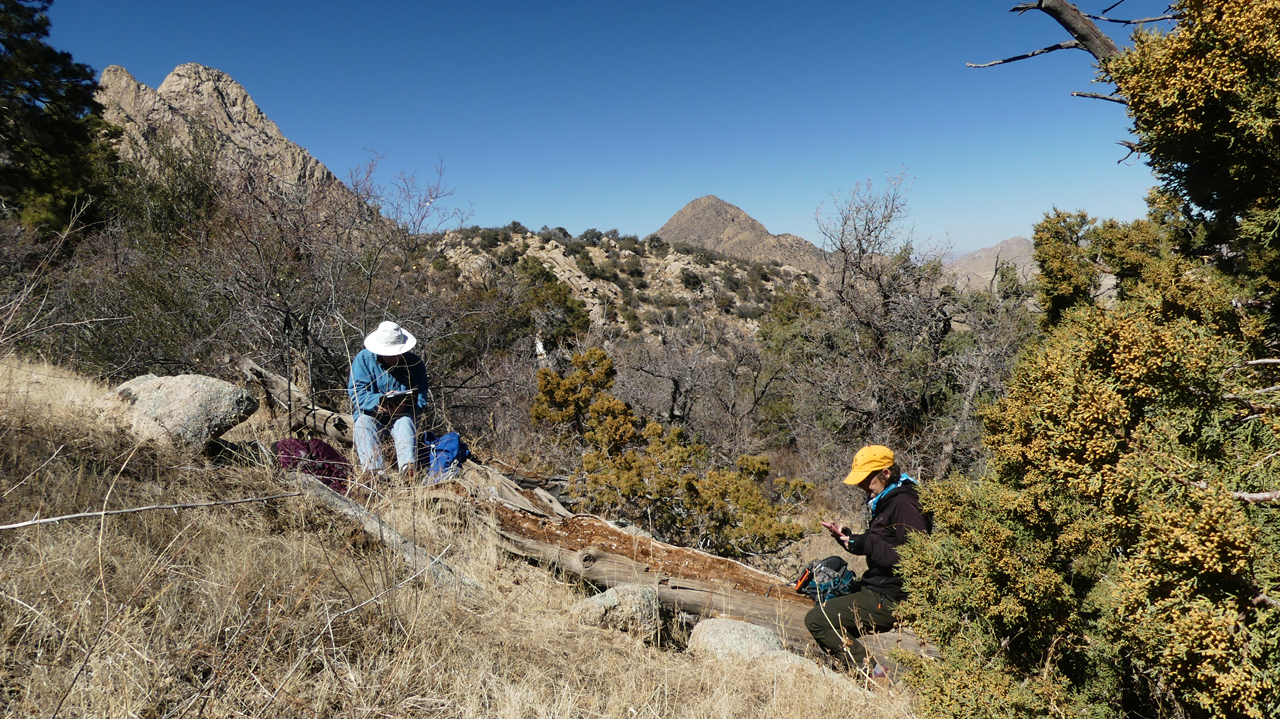 At our lunch stop, high enough for a good cell signal! 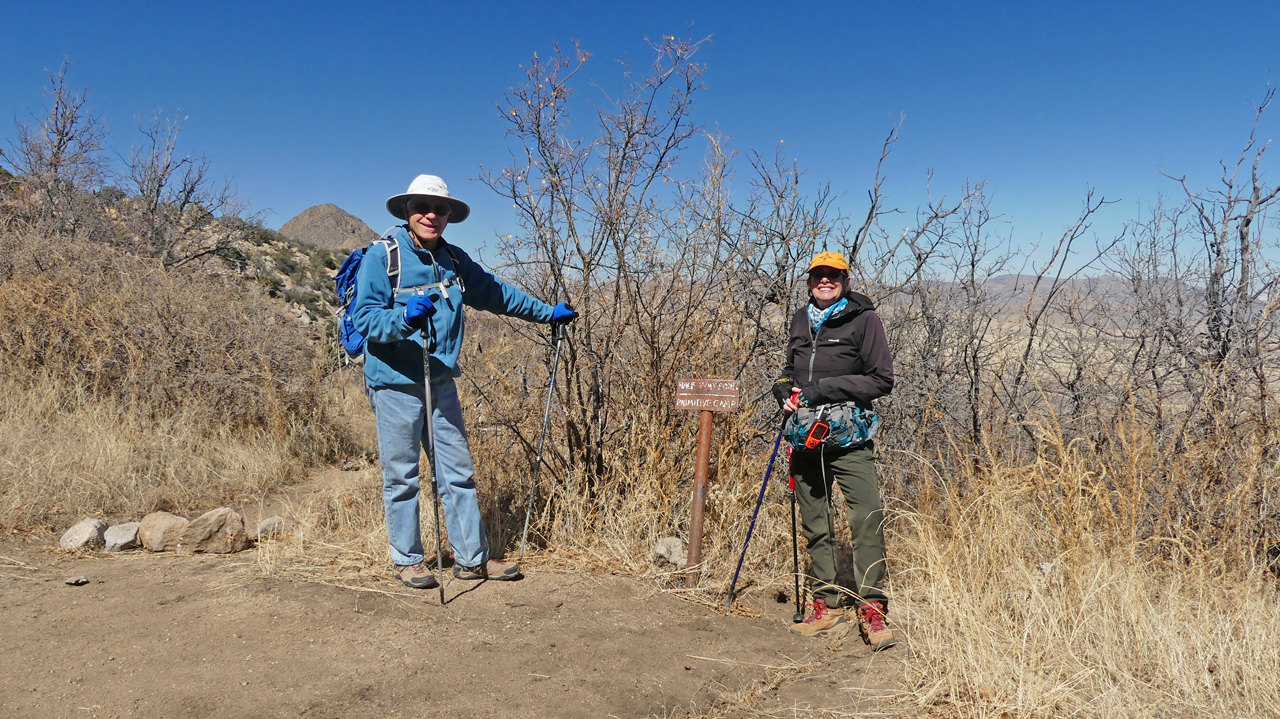 We were halfway around before we realized we had gone around the loop the "wrong" way! But there were fewer big step-downs on the second half, so it was all good. 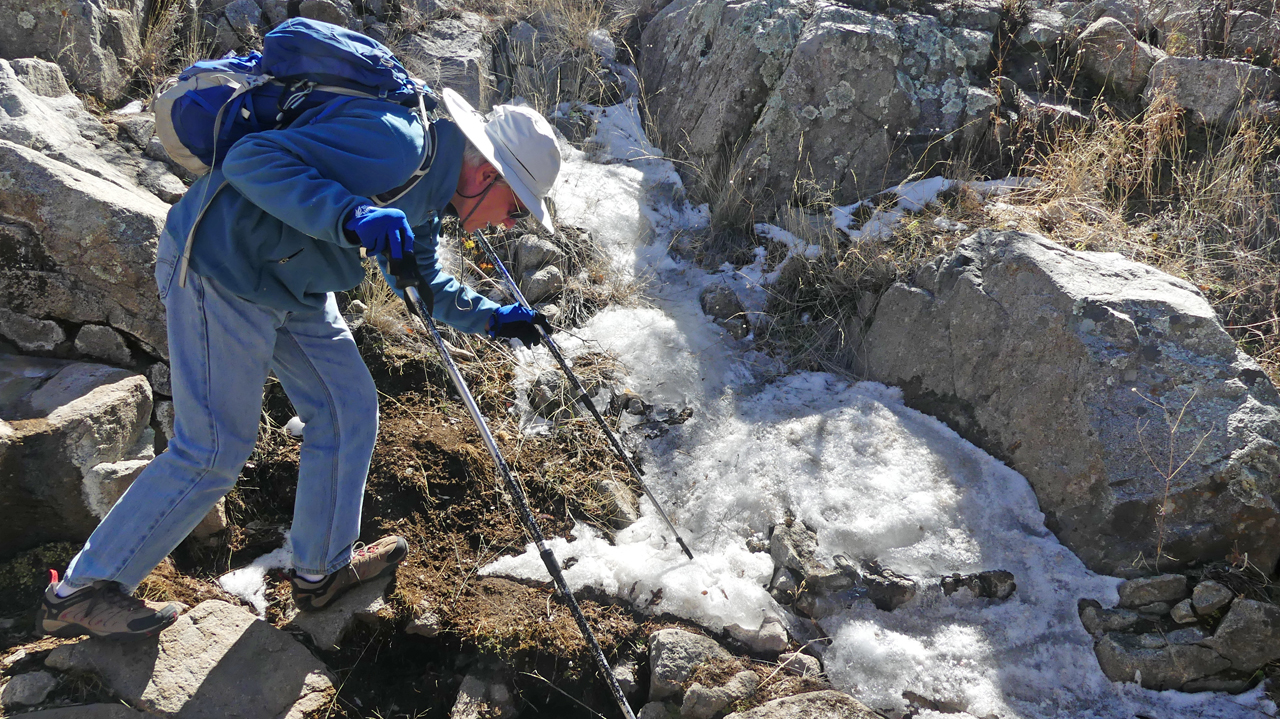 At the top of the trail, the classic high desert forest gave way to Ponderosa pines and patches of ice and snow.l 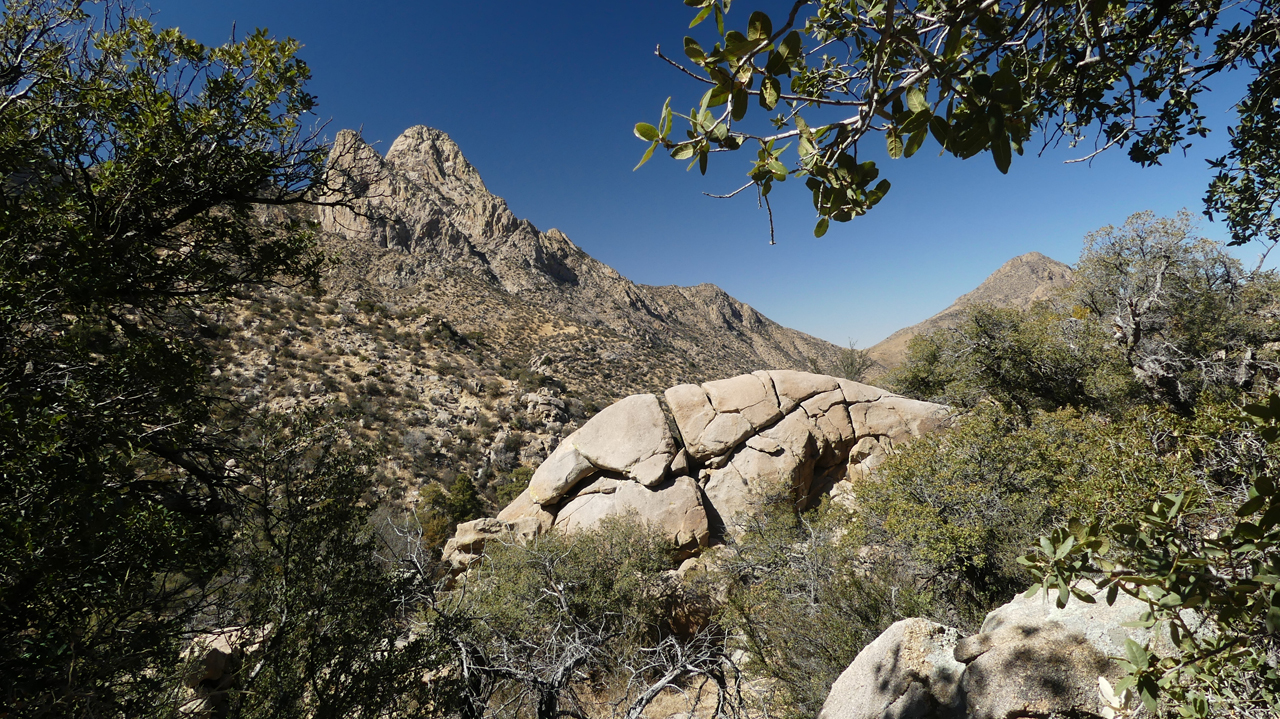 Non-stop views! Needles on the left, Baylor Pass on the right. 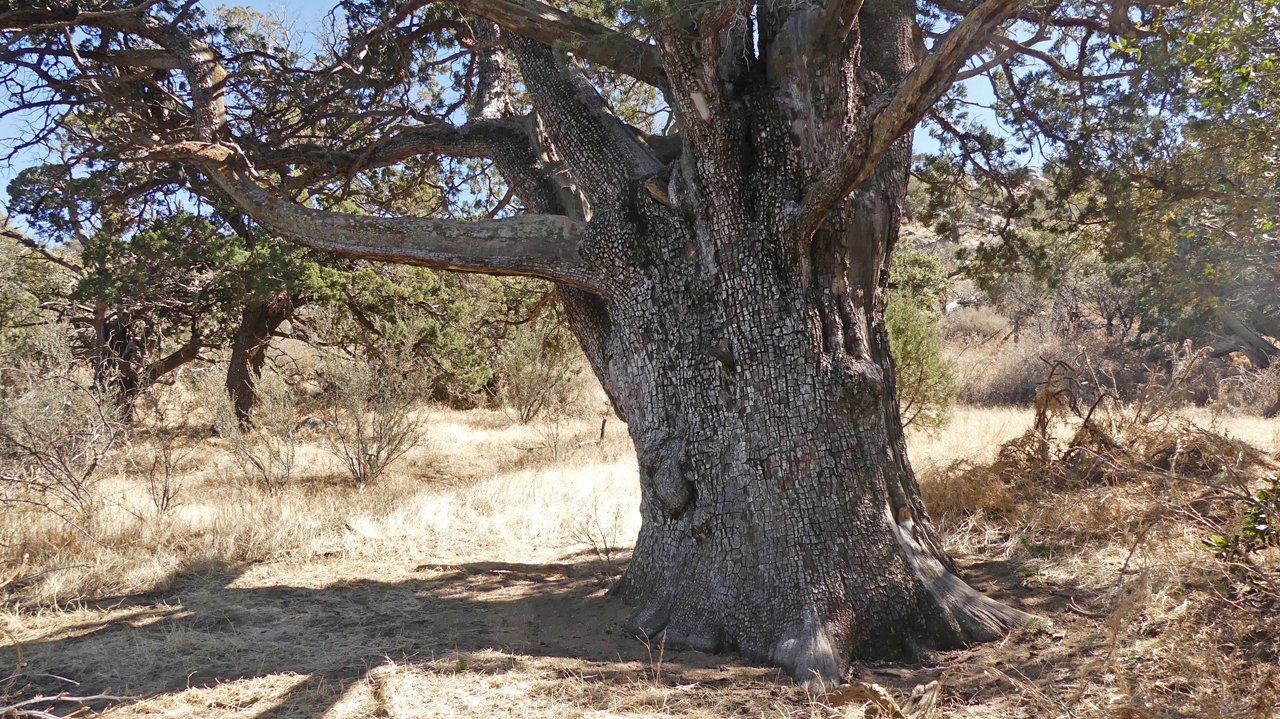 Some of the junipers on the upper part of the trail were absolutely enormous! 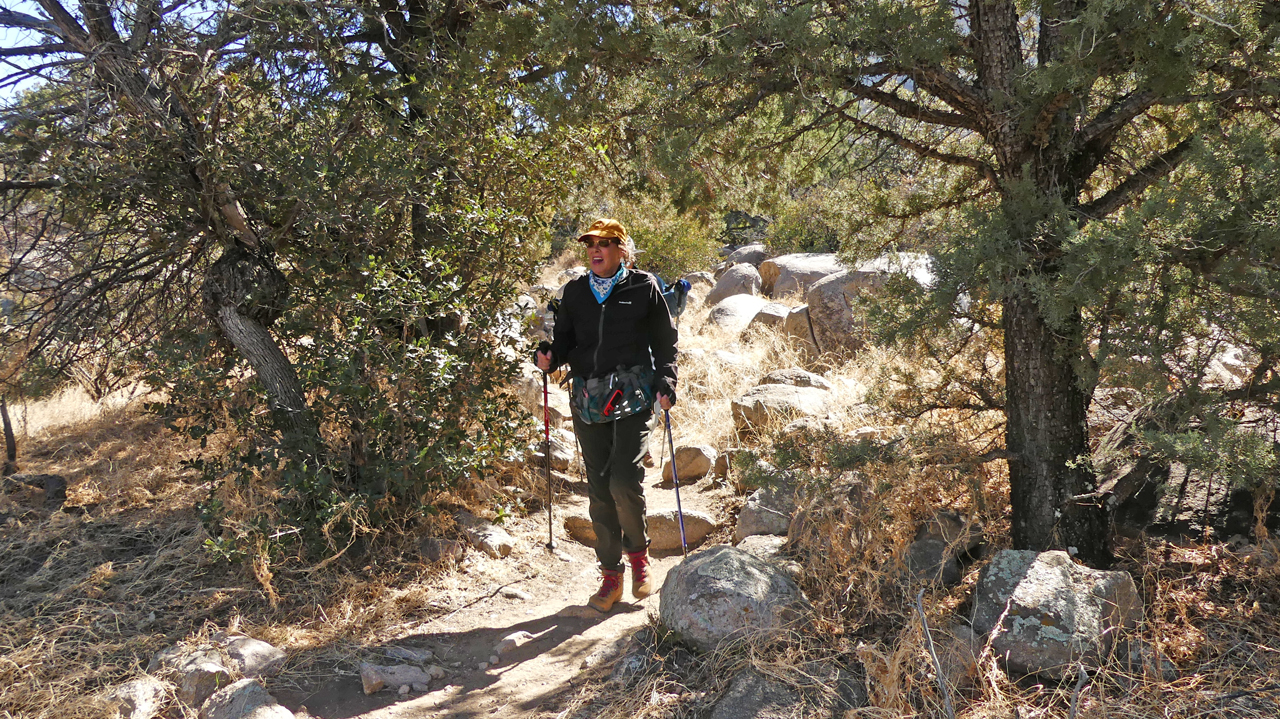 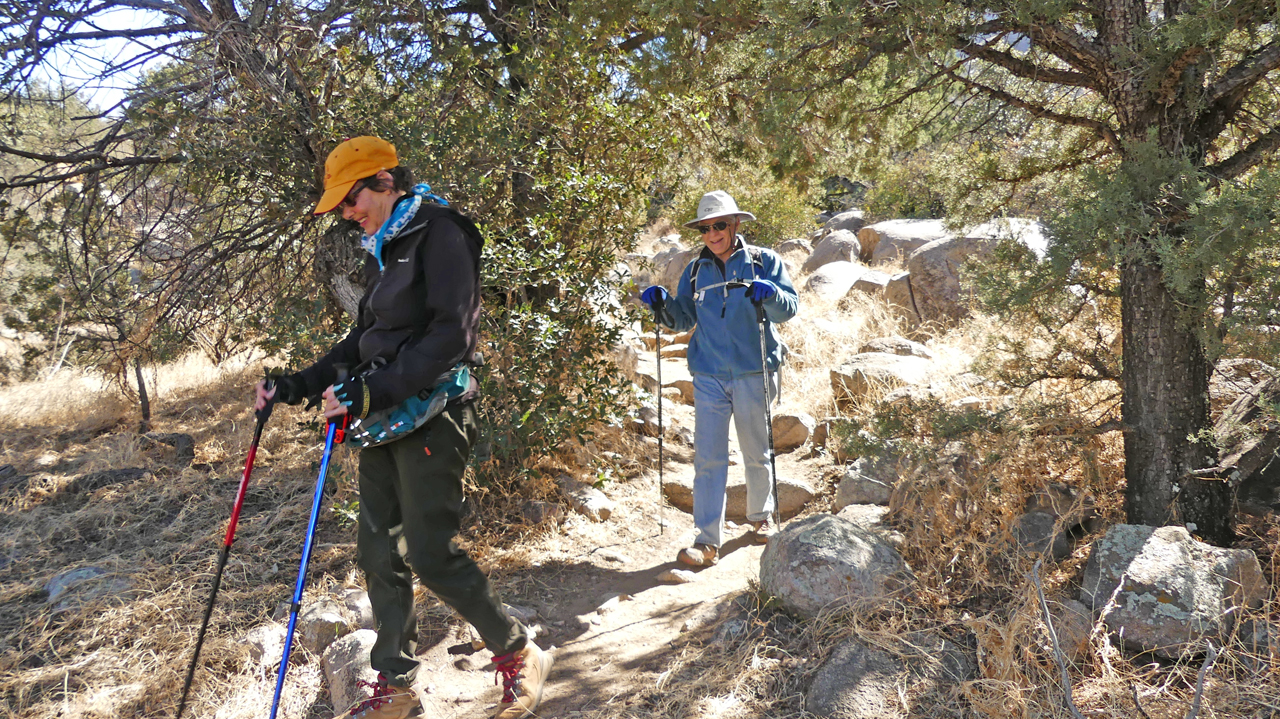 Happy hikers in the home stretch. 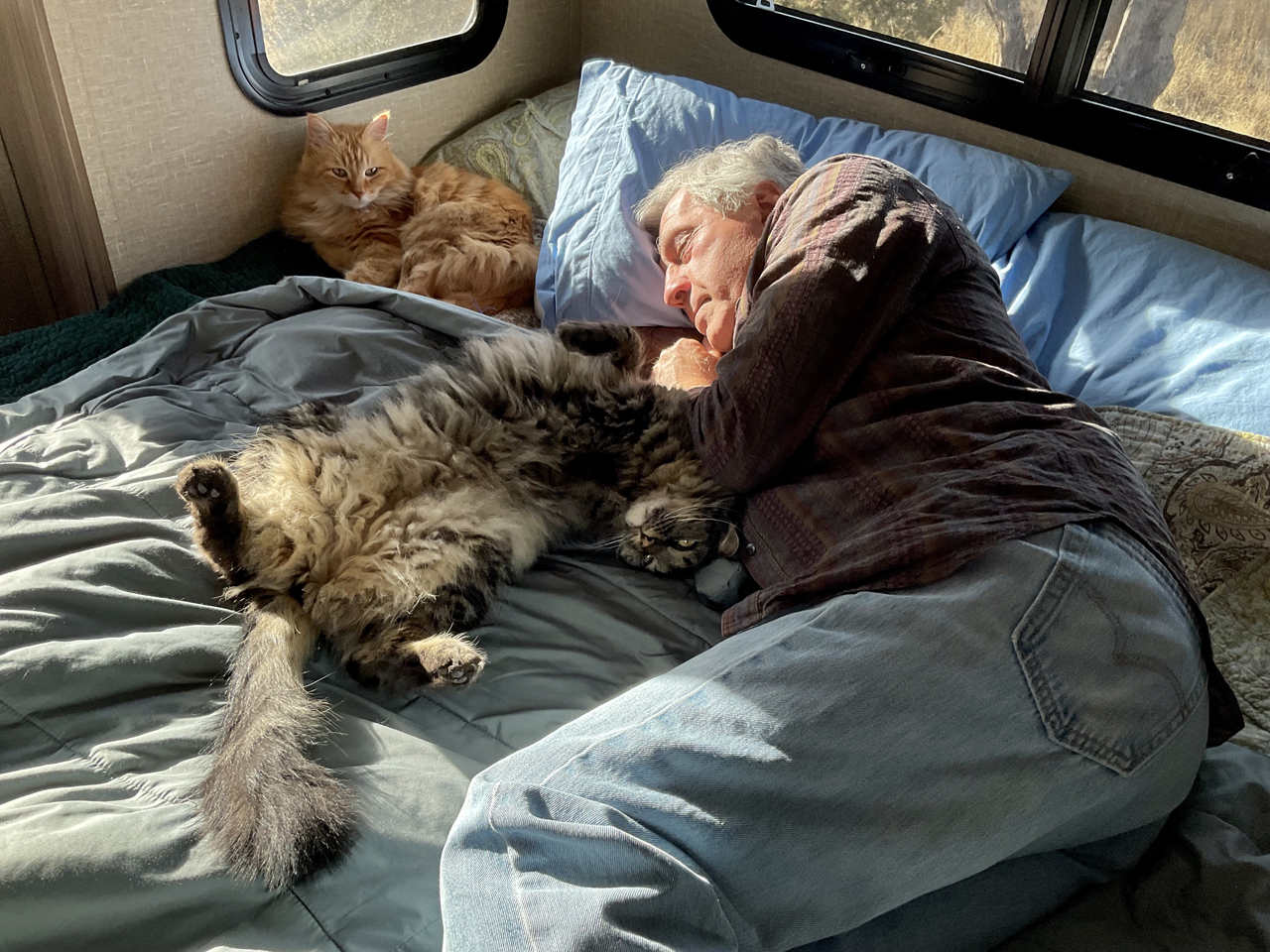 The cats were exhausted from our hike! 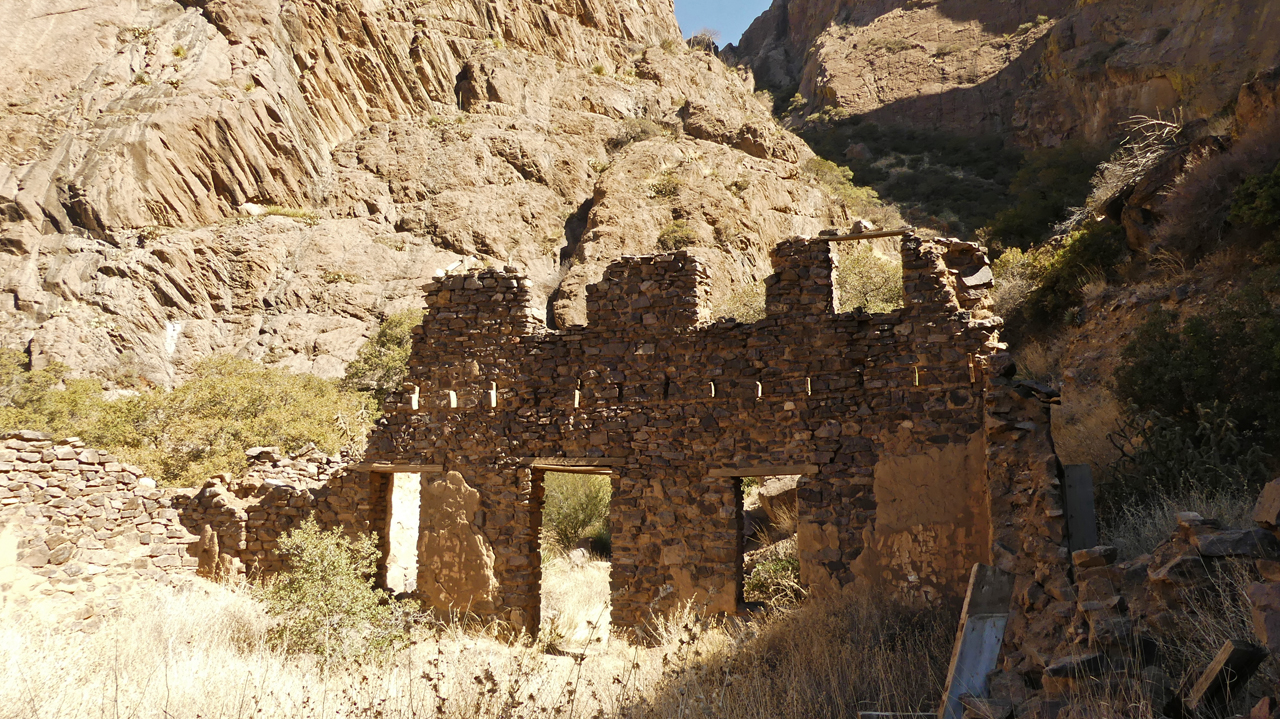 We met Brenda, Linda and Angeliene at the Dripping Springs trailhead the following morning. We came for the hike, but were far more impressed by the history. In the late 1800s and early 1900s, the rocky canyon near the tiny spring would be home first to a hotel, and later a tuberculosis sanitorium. In the 1870s, Colonel Eugene Van Patten constructed a very fancy hotel near the springs. Van Patten was the nephew of John Butterfield (of Butterfield Trail fame), and had a thrilling career as a soldier and a brief stint as a Pony Express rider. 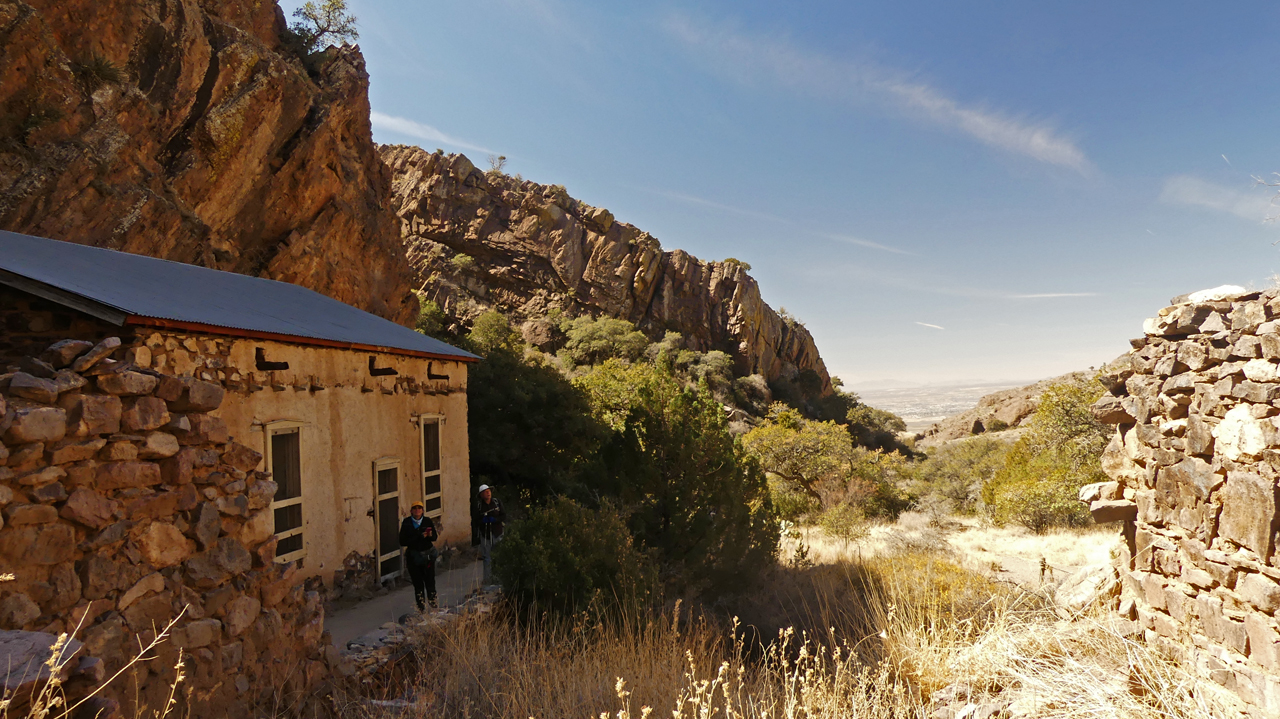 Van Patten settled with his wife, Benita Madrid Vargas, a Piro Indian woman, near the spring, and began construction of a two-story 14-room hotel in the 1870s. 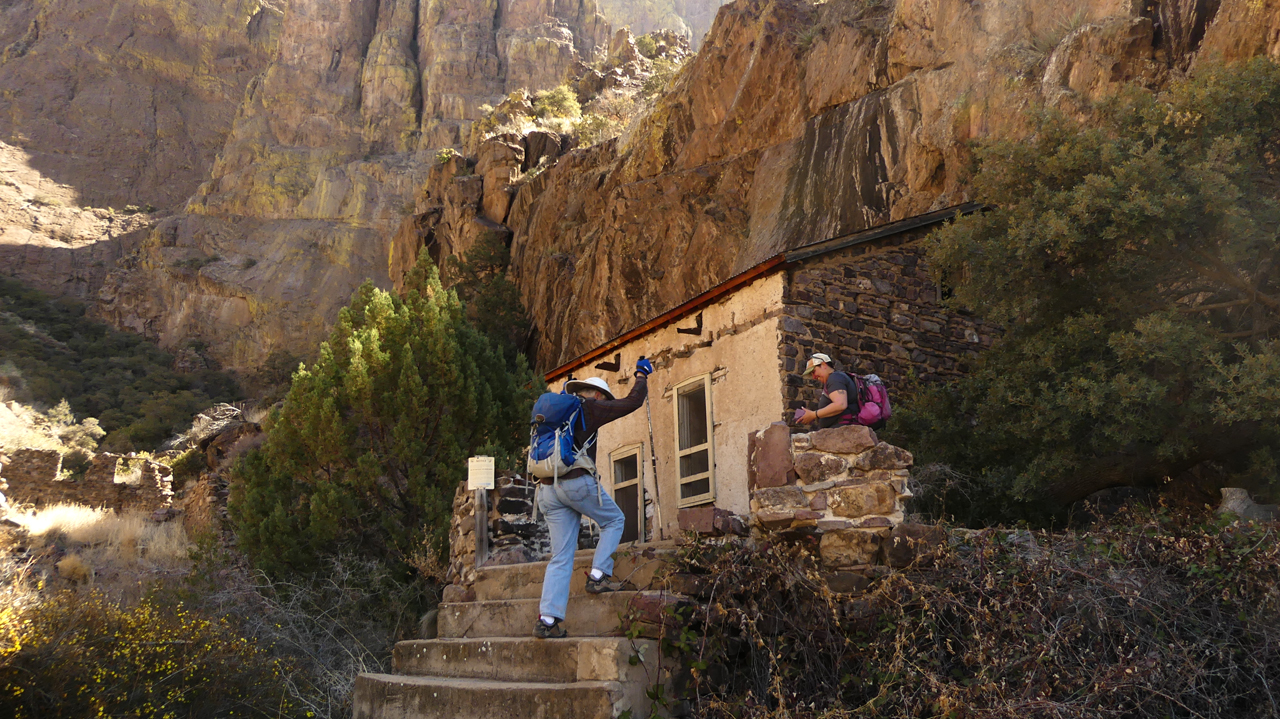 Guests arrived via a spur line of the Butterfield stage, and included notables such the lawman Pat Garret, Pancho Villa and possibly Billy the Kid. 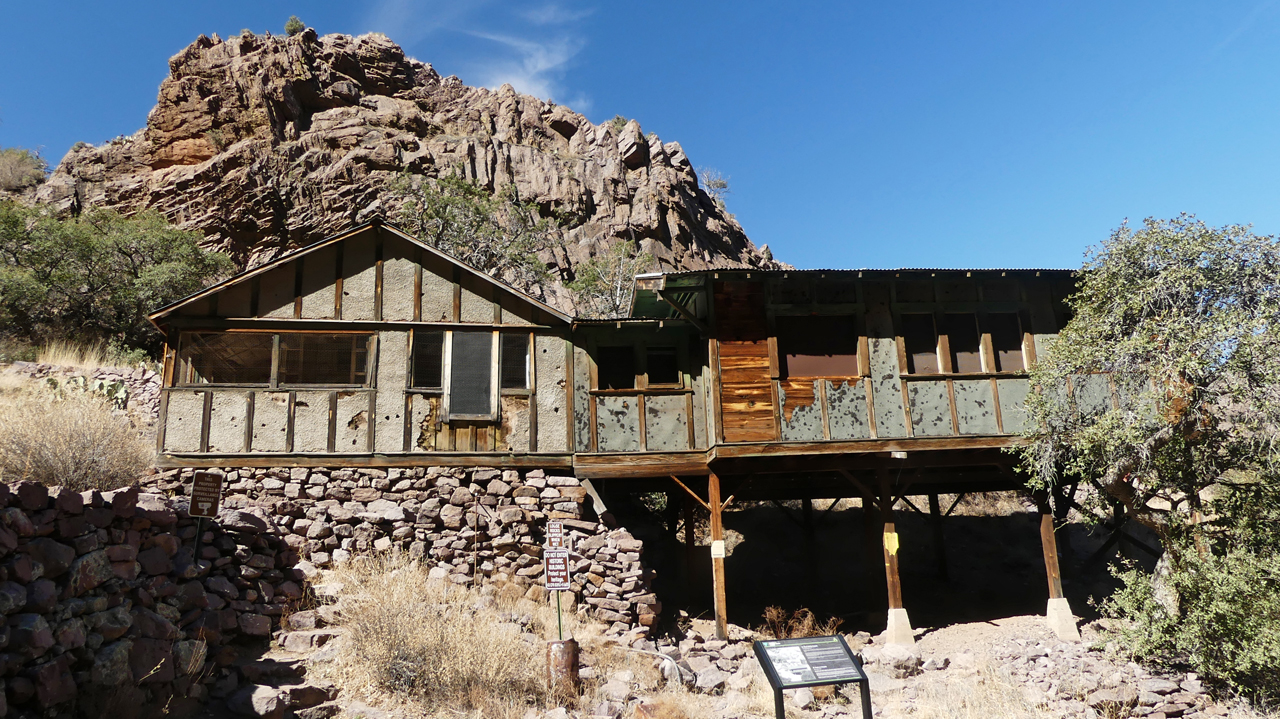 In 1916, after an extended legal battle, Van Patten turned the land over to Dr. Nathan Boyd, who added some lovely wood-frame buildings that would briefly serve as a tuberculosis sanitorium. 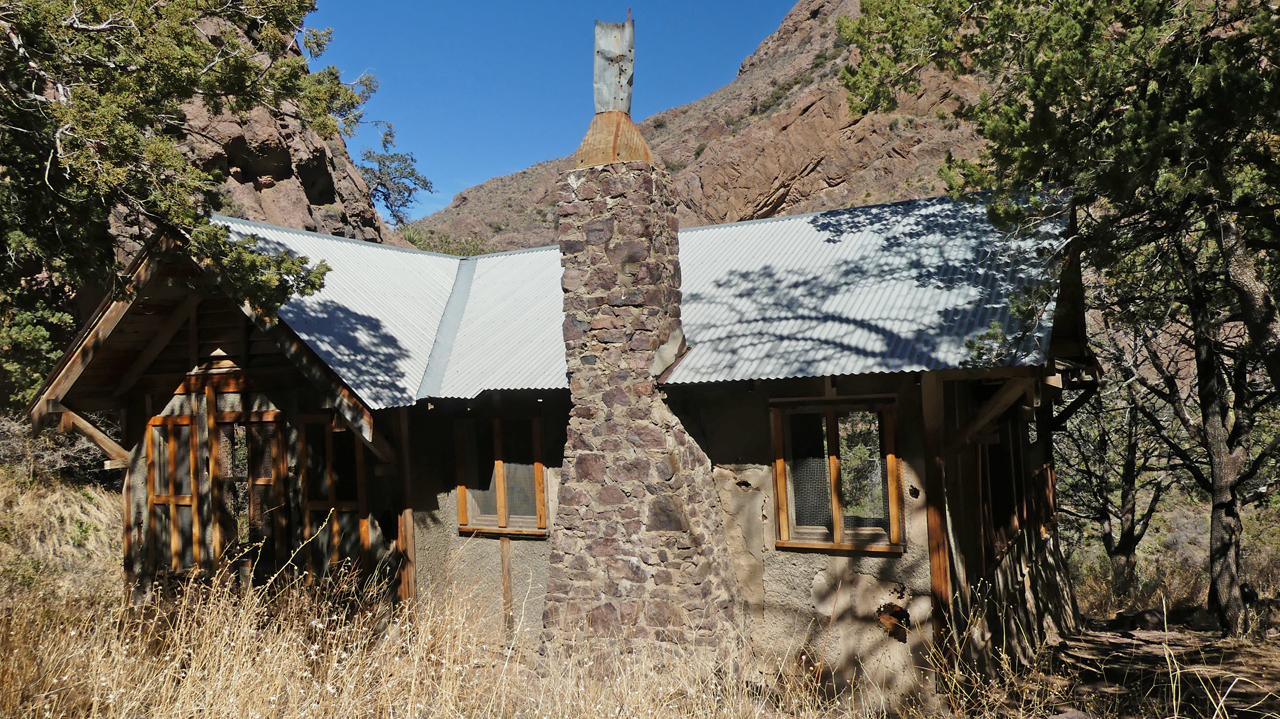 But by the 1920s the classic reliance on high and dry mountain air gave way to more modern treatment options, and the sanitorium became part of a nearby ranch.

Dennis filmed this video of the spring after clambering up a steep scree slope, where no 73-year-old man has gone before, and should never go again. 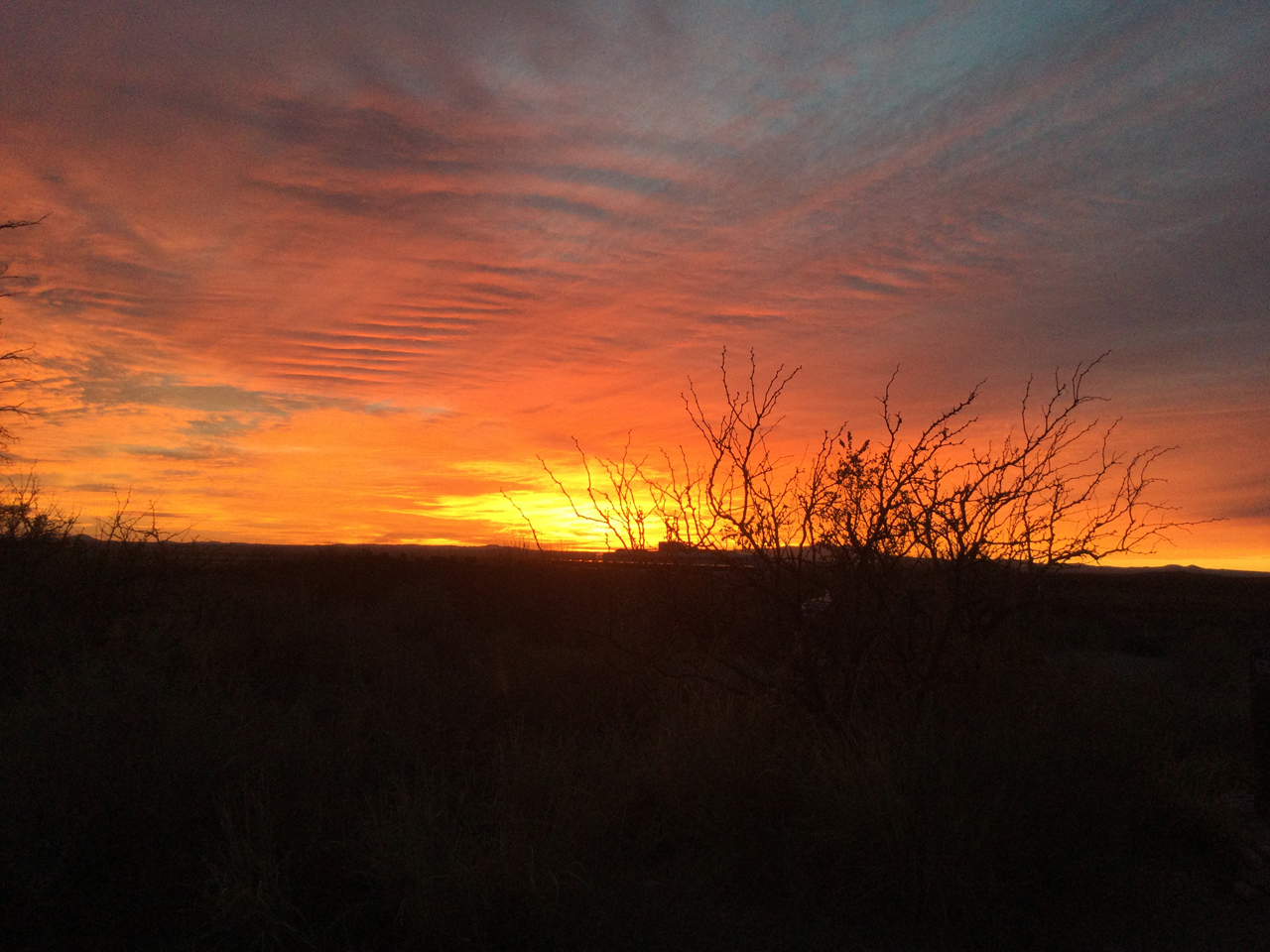 We camp at Faywood Hot Springs on our way almost to and from anywhere we go! On this night, we were treated to a fiery sunset. 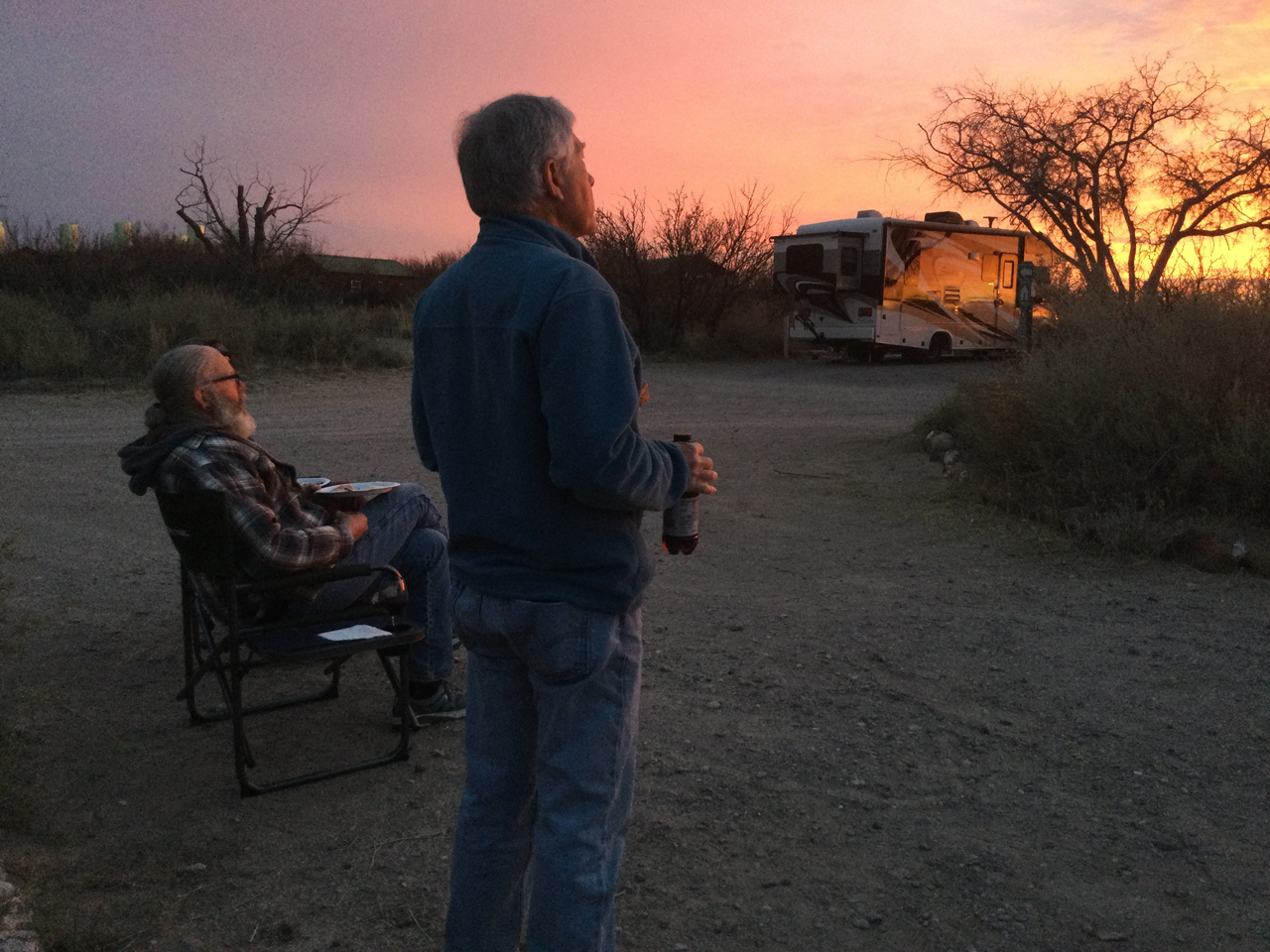 And we made some new friends too! Perfect end to a perfect trip!