So what's the deal with Buehman Canyon? In 2018, the Pima County Board of Supervisors purchased 3200 acres of land around the canyon $1.5 million. The purchase was adjacent to other acquisitions including Six Bar Ranch, the A7 Ranch and M Diamond Ranch and was designed to protect the entire watershed of Buehman Canyon. However, so far as we can tell, the public has zero access to these public lands. We learned on a hunting forum that Brush Corral Road, the historic access to Buehman Canyon, was gated and locked by private landowners. Ditto for another approach via Piety Hill. So looking for an out-of-the-way hiking location far from the "covidiots" who refuse to practice social distancing, Dennis and I approached from the north, where a side road might offer a possible overland route to the edge of the canyon. 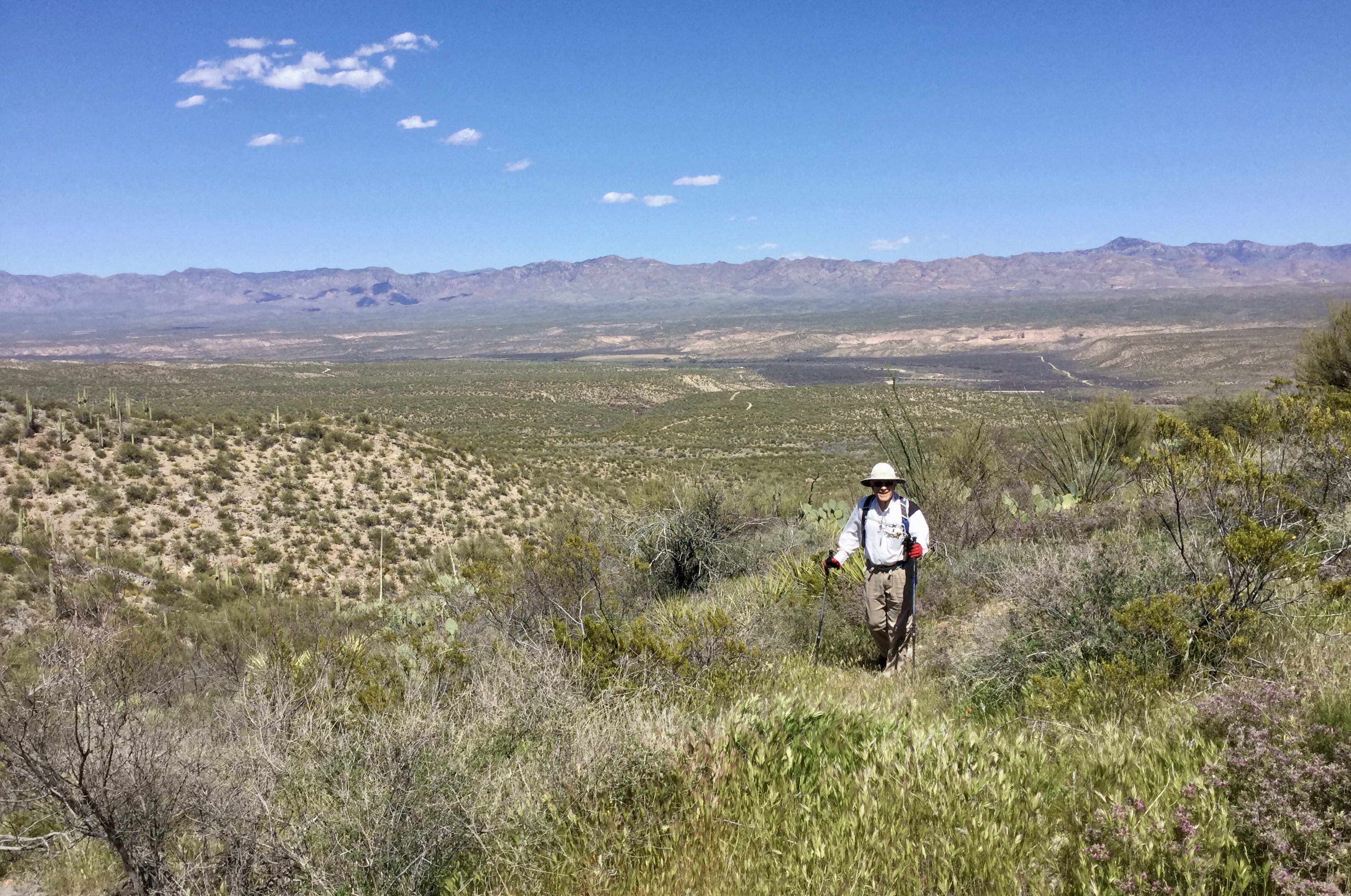 But all these canyons are so braided, and so often deeper and more sinuous than you expect. It was a more-or-less random brush-bashing, with lots of opportunities to exercise our navigational skills! 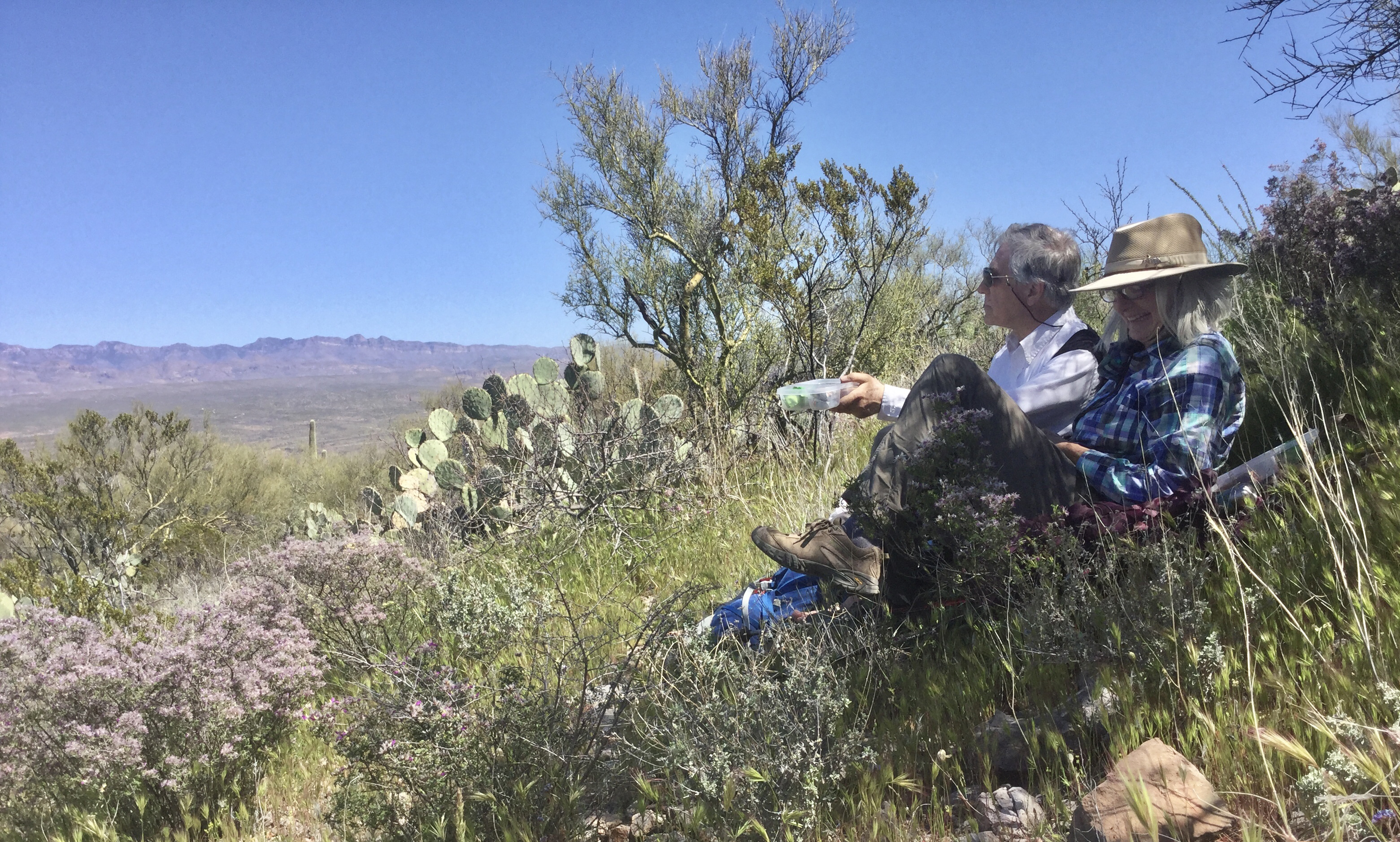 Lunch on a knoll overlooking the San Pedro River Valley, in a field of owl clover, apricot mallow, dalea, tackstem and blackfoot daisies 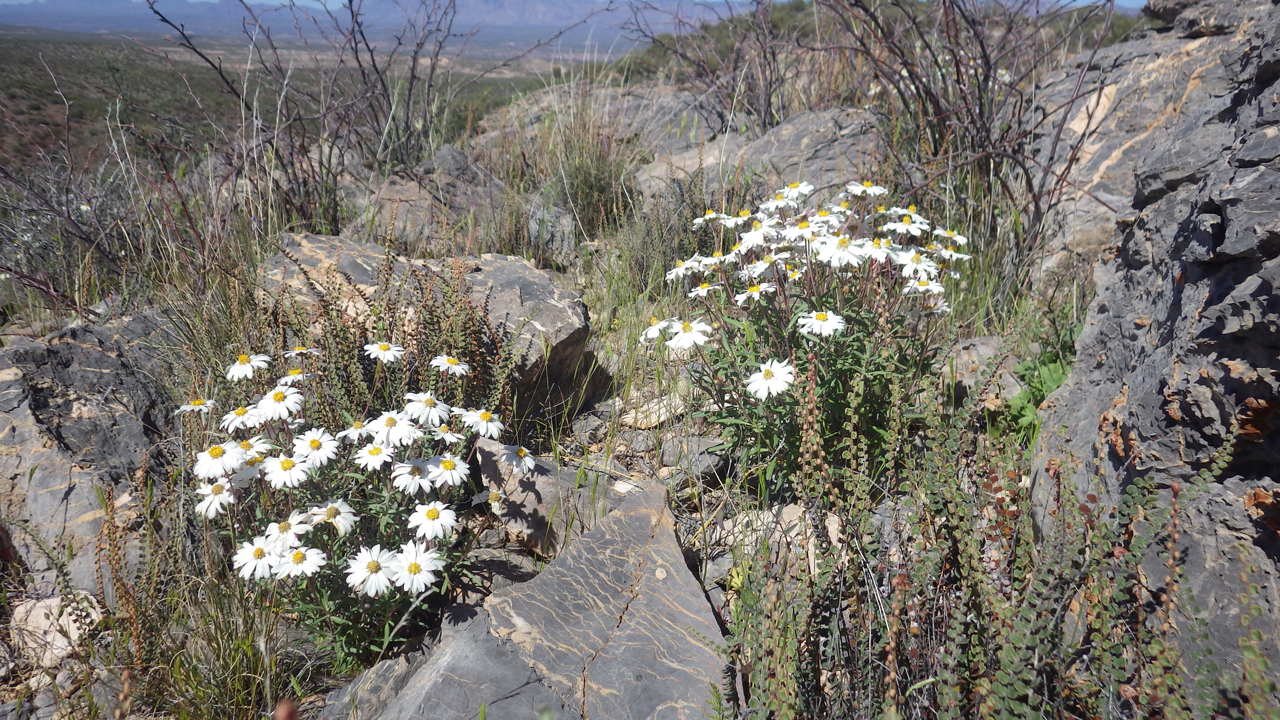 Blackfoot daisies were really out in force today. And notice the rock — some kind of limestone, wrinkled as an elephant's hide, and covered with petrified plant debris. 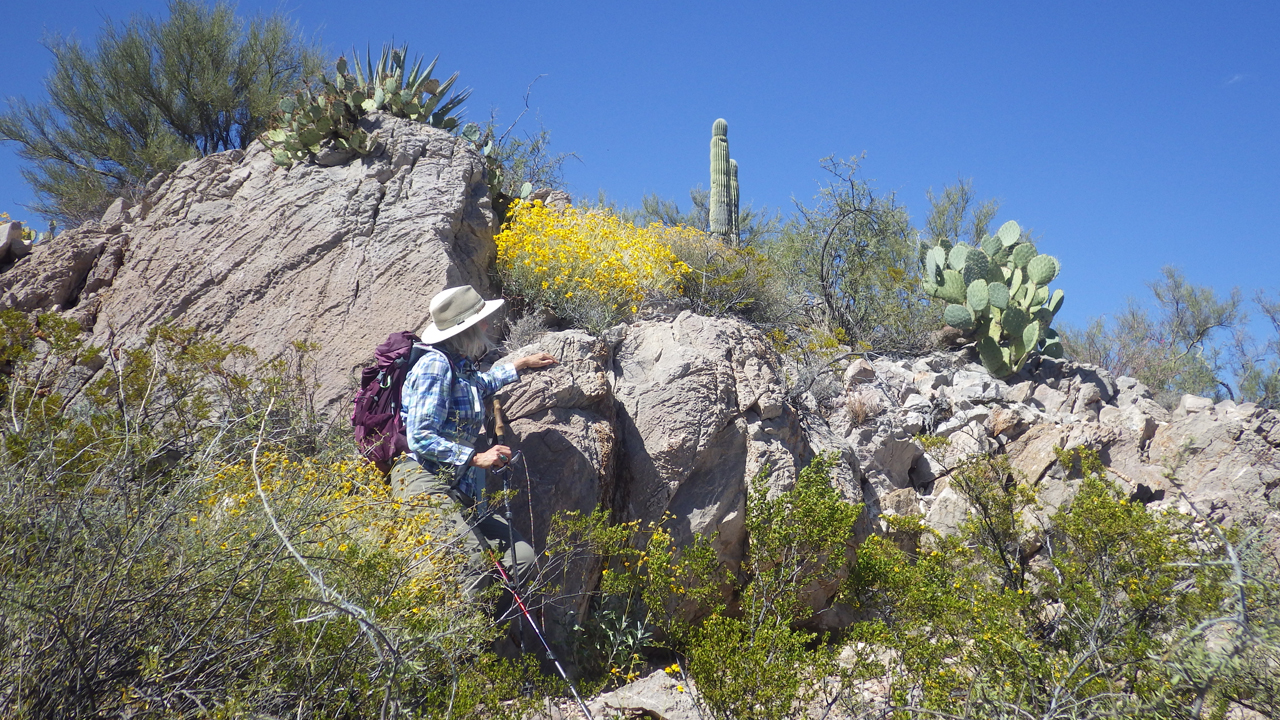 A knoll of "elephant hide" lit up with desert marigolds. There was a significant cave at the base of the cliff. 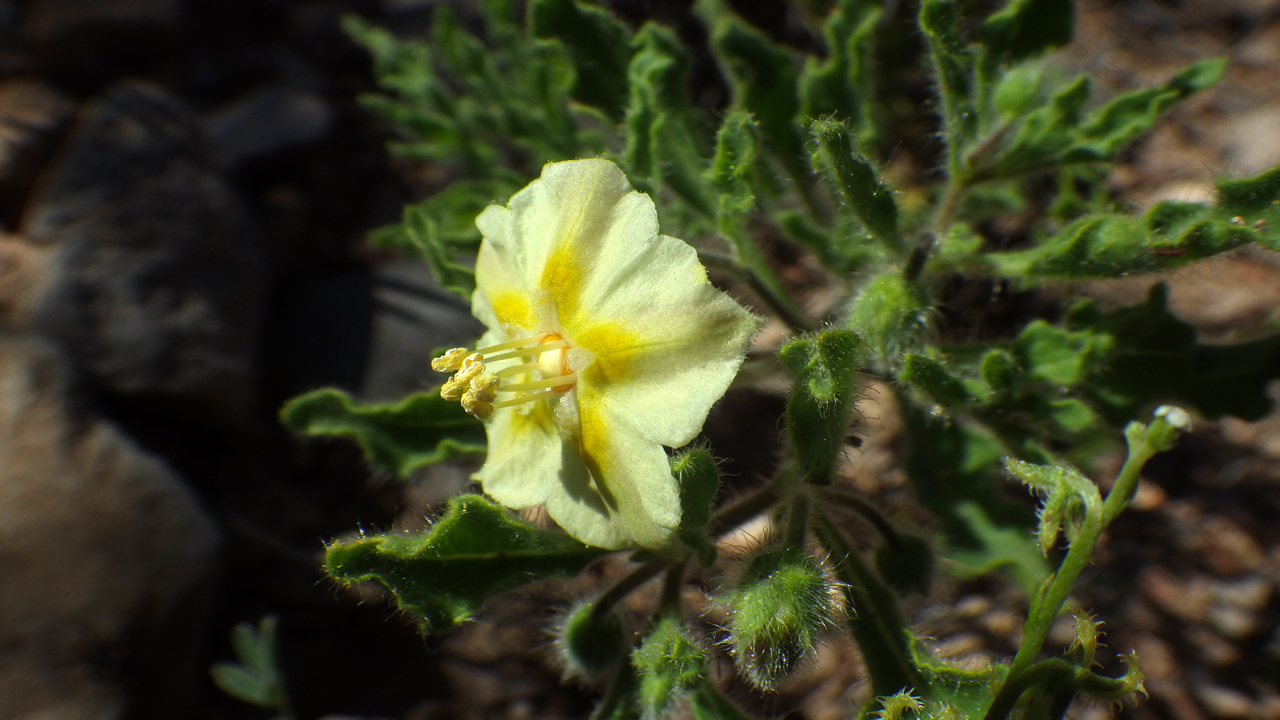 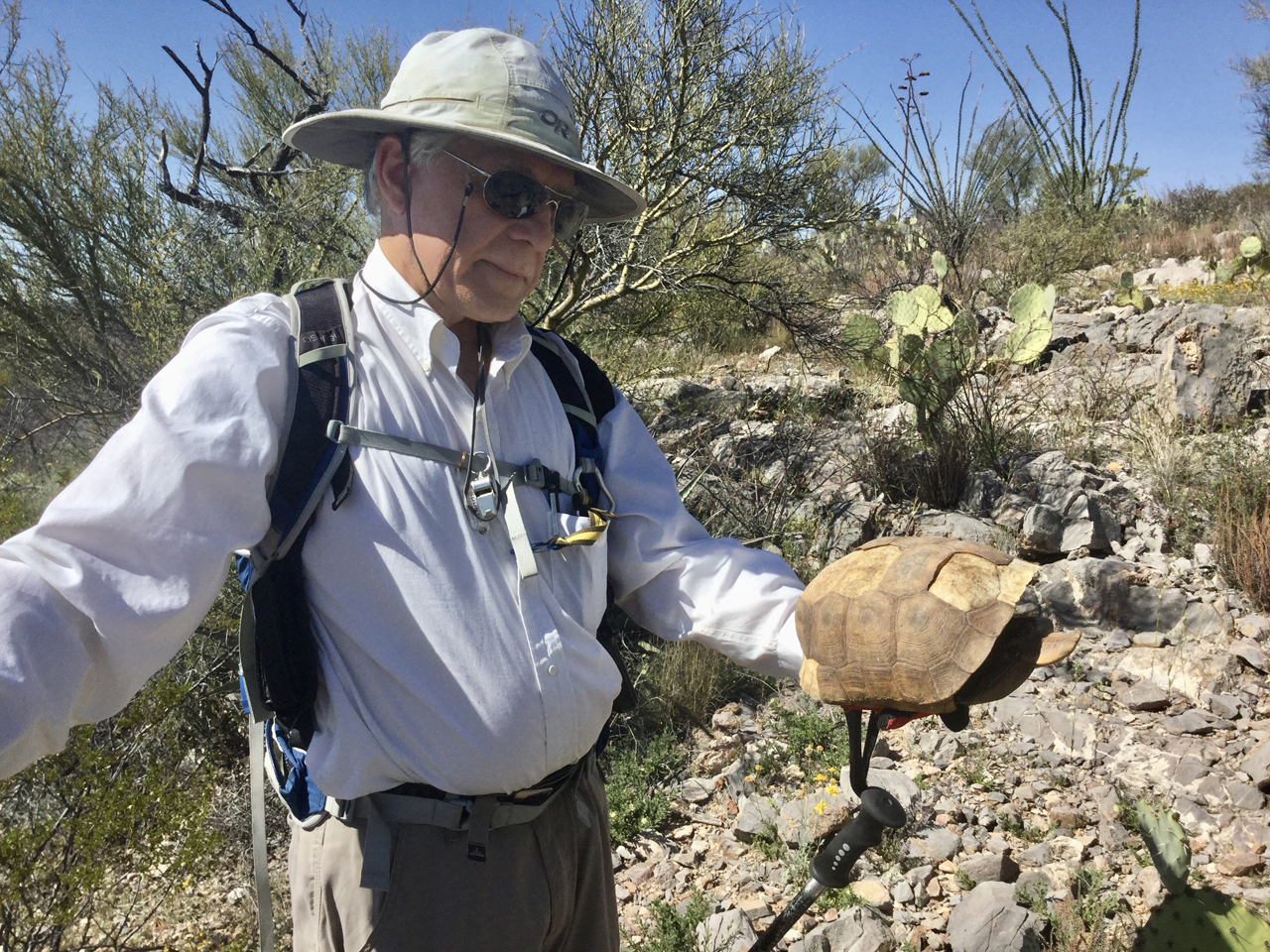 An intact desert tortoise shell. First time I've ever found one in nature! The carapace is white like any skull, but then covered in hexagonal "tiles". 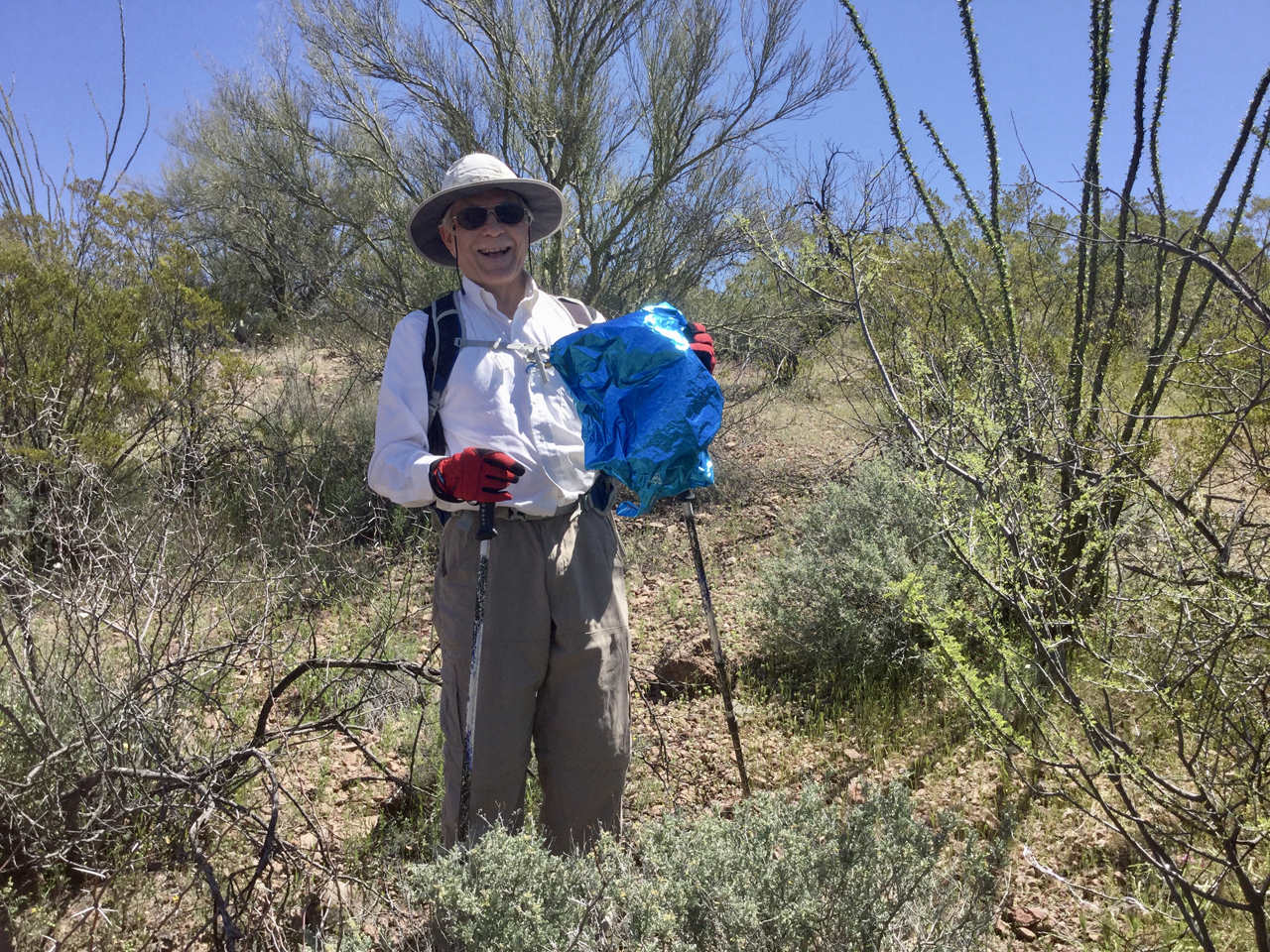 The final resting place of all Mylar balloons!

We returned to the area two weeks later, this determined to drive all the way to the end of the road, where it drops into Buehman Canyon. Our bored ham radio buddies — Doug, Al and Dave — accompanied us via two meters, and the miles passed quickly. However, about a mile from what was clearly public land, we found a locked gate and sign designating the area as "private conservation preserve". What the hell? So, after a tricky eight-point turn, we backtracked to an abandoned road not far from our previous hike, and tried once more to reach the canyon by an overland hike. 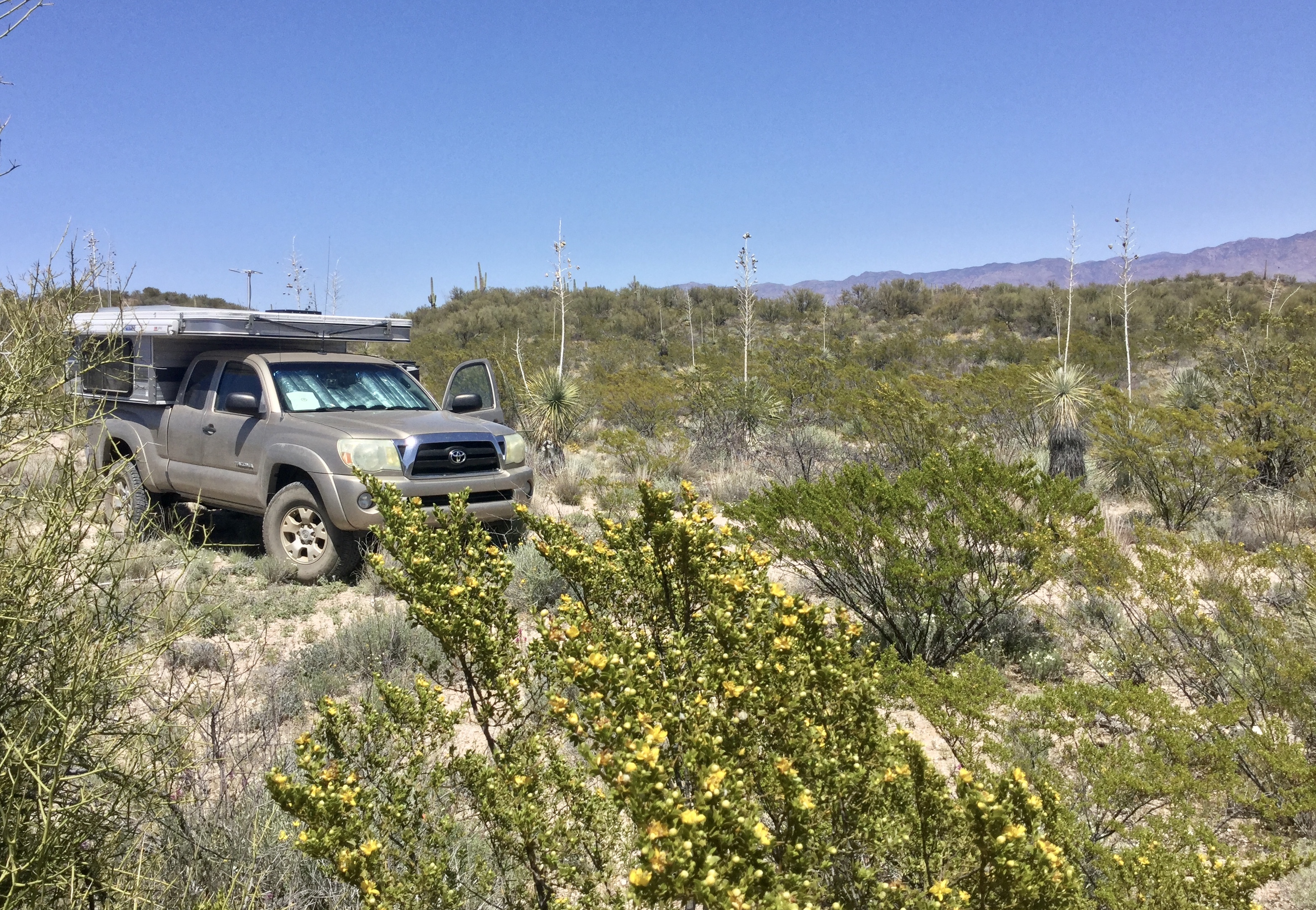 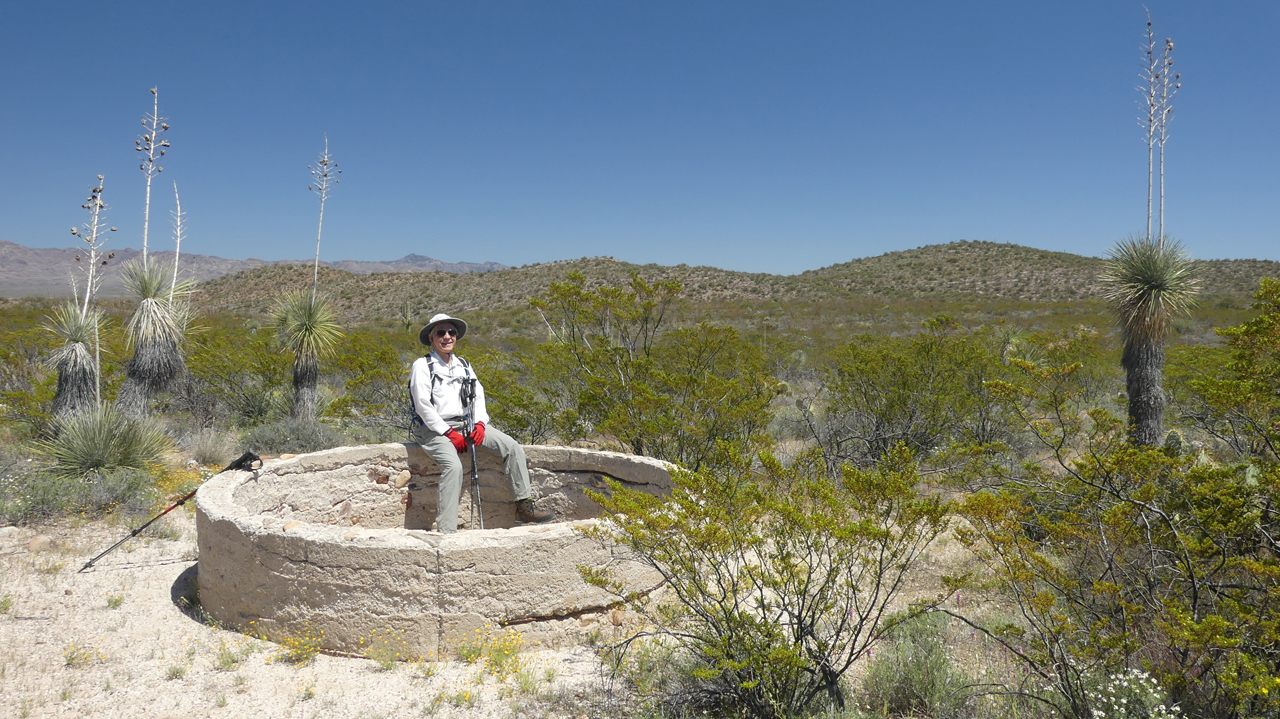 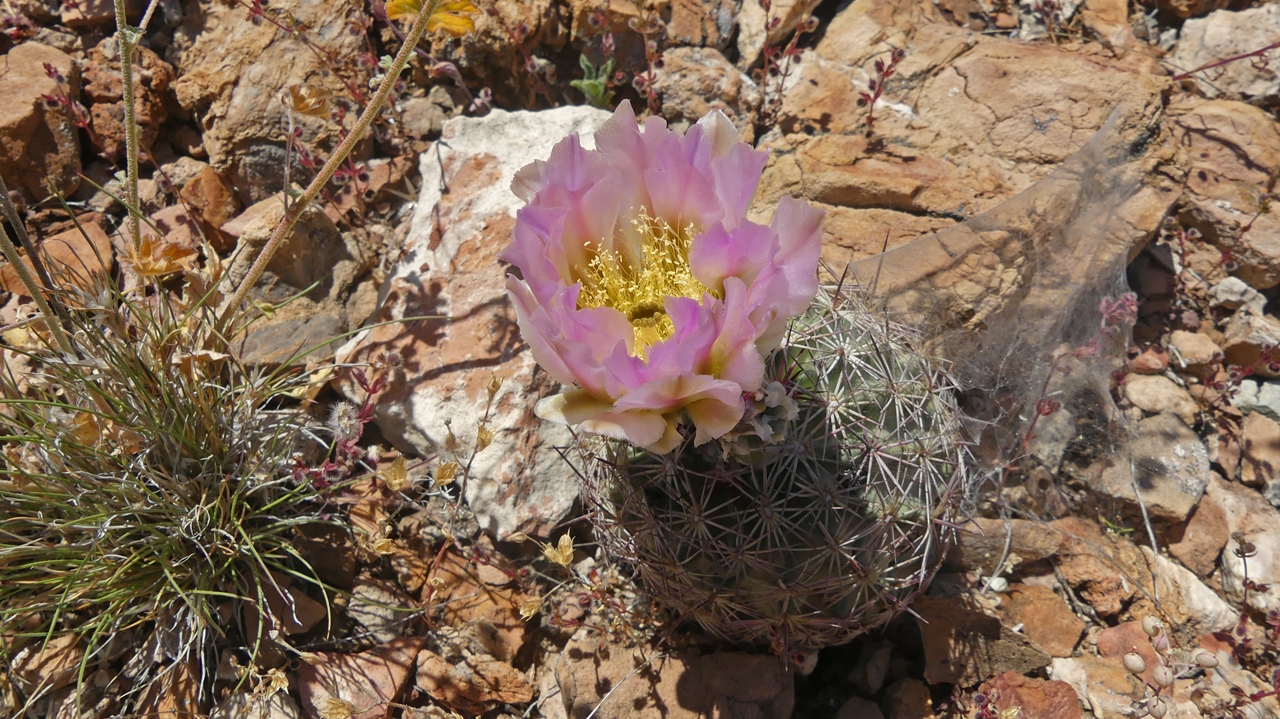 Okay, is this a rogue hedgehog cactus or what? Single stalk and bulbous with pale pink blossoms. The color isn't quite right, but my best guess is Simpson's Hedgehog Cactus. The hills were covered with them, but normally they should only proliferate at higher elevations. 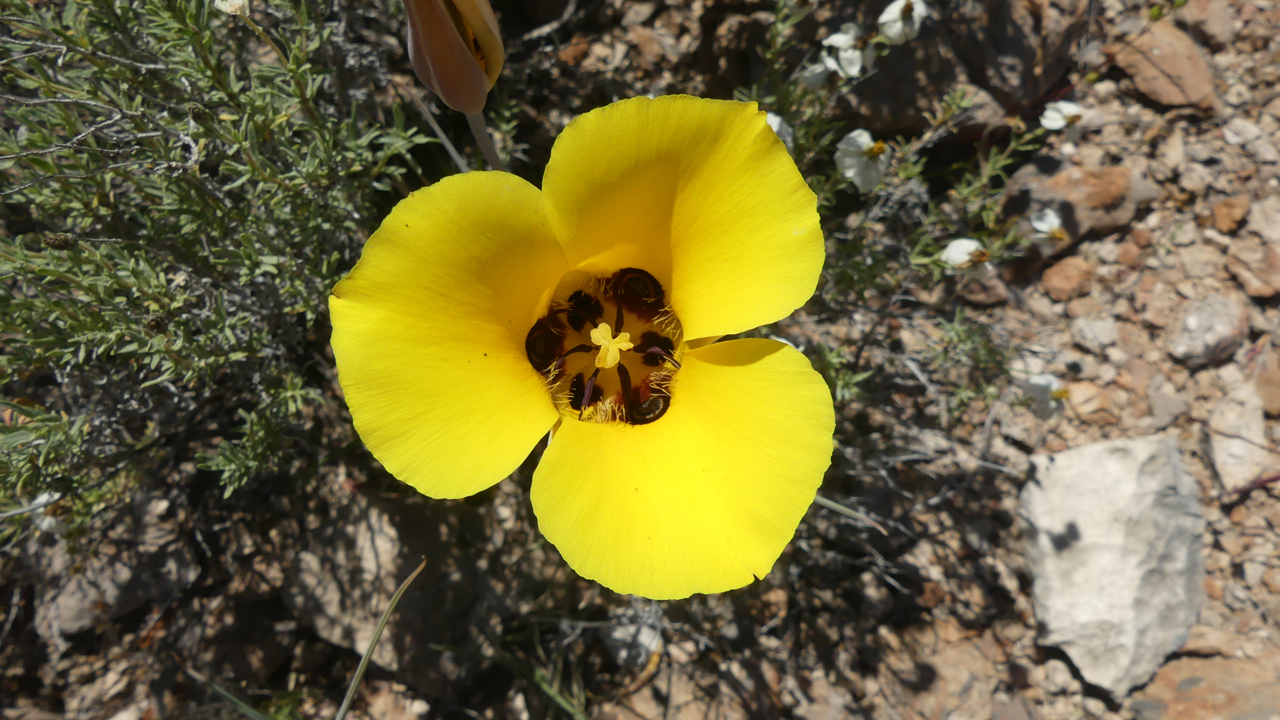 We stayed high on the ridge, and as we climbed up out of a steep drainage, the canyon suddenly came into view. 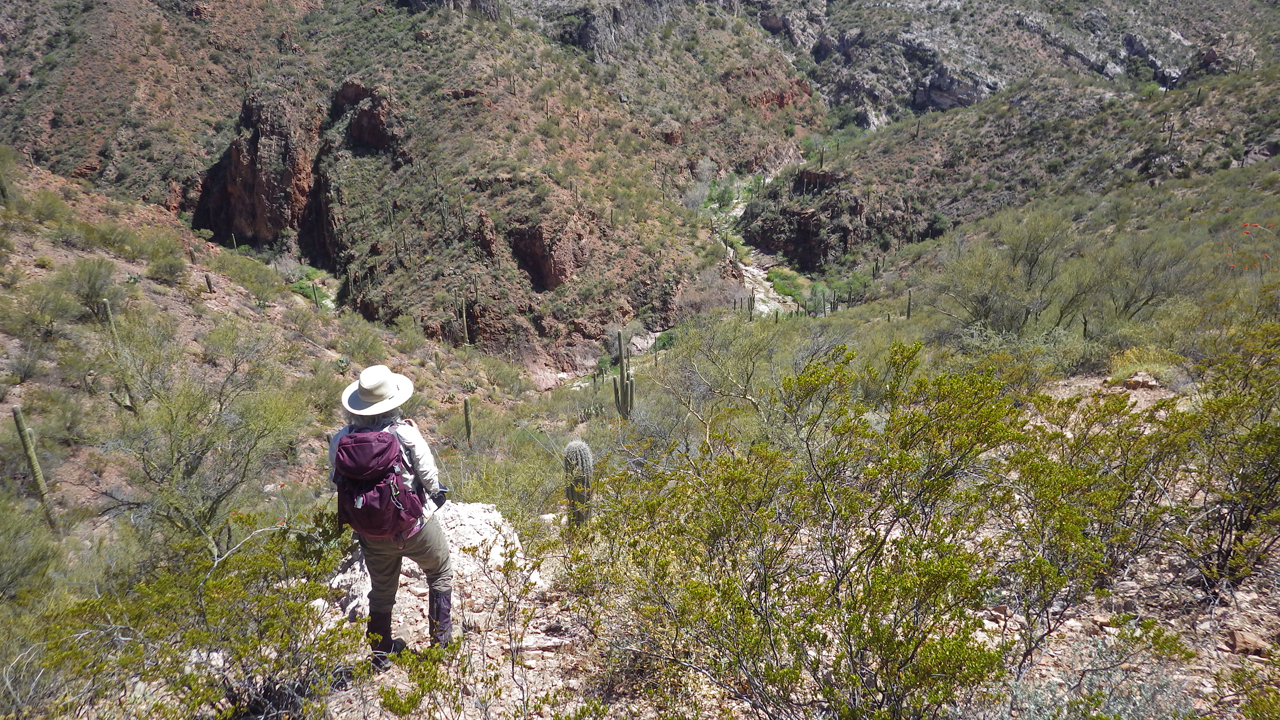 It was too late in the day to make our way to the canyon bottom, but it sure does look inviting. We were happy just to have it in our sights after several attempts. And there's nothing quite like the scream of mountain lion to send you back uphill in a hurry. 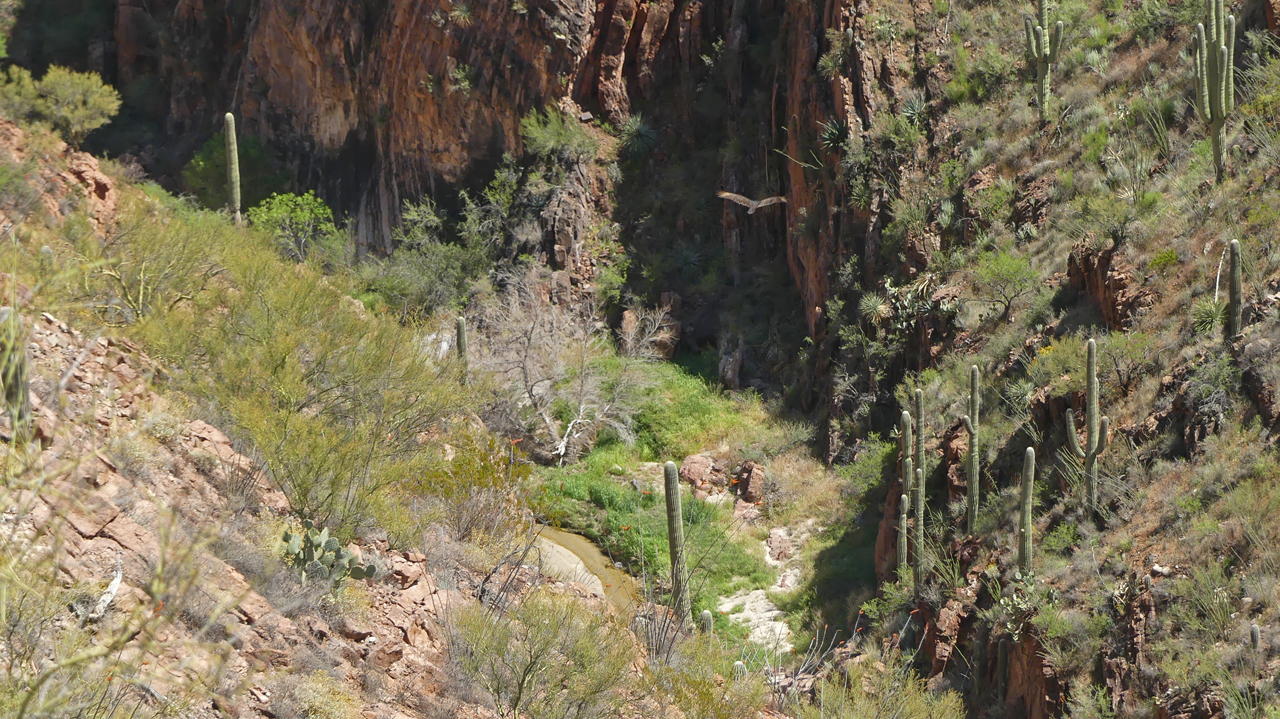 Yes, there was water in the bottom of the canyon. Turkey vultures circled overhead, sure that we would be their next meal. 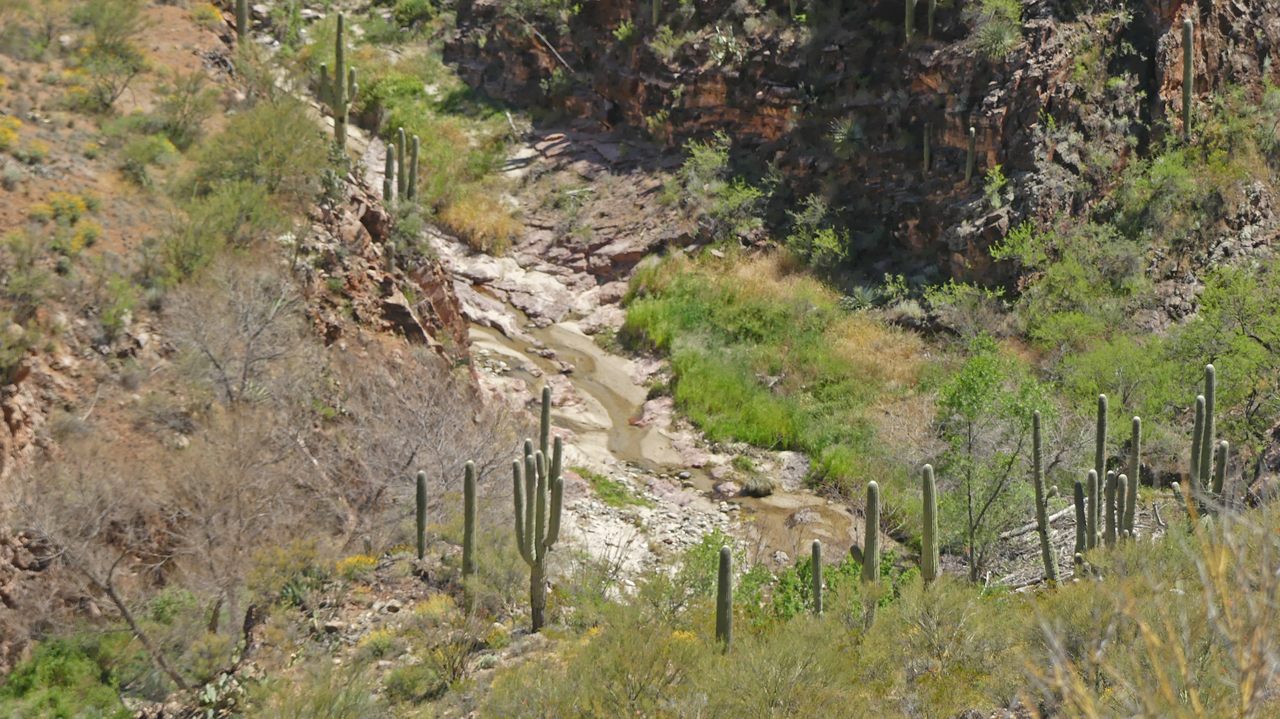 We are intrigued. We'll return to the canyon on a cooler day, with an earlier start.